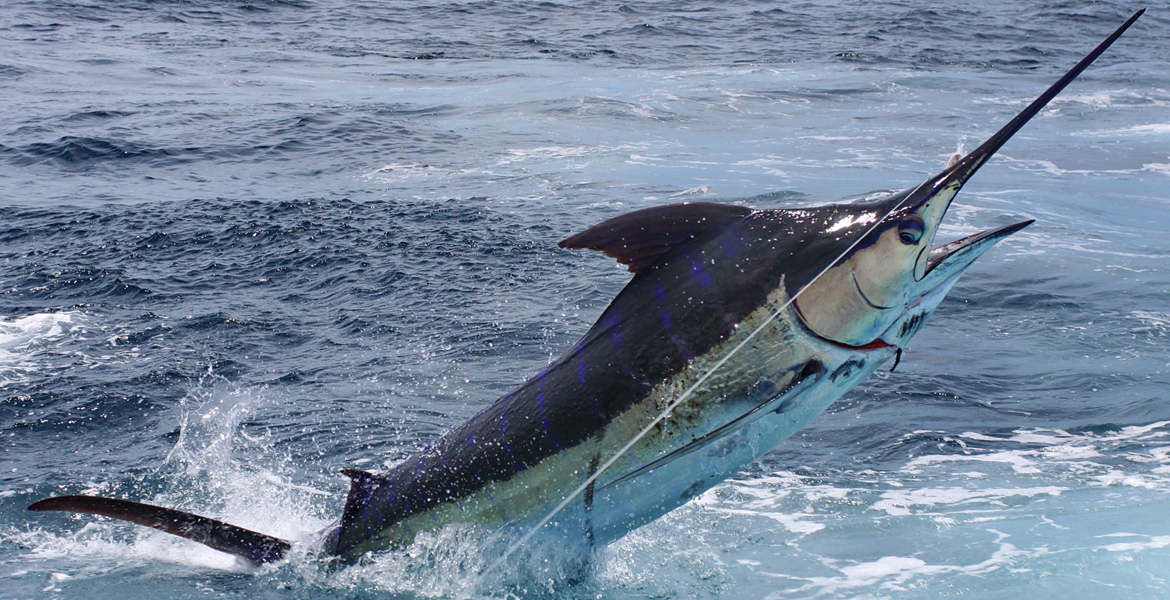 The King of big game sportfishing species, the most prized, lure and fly crushing, hardest hitting predator game fish is the Blue Marlin. As the number one sought after trophy fish in the deep, hooking into one powerhouse predators will guarantee a memory and story to last a lifetime. For the best Marlin fishing in Costa Rica, your absolute best opportunities are from the Los Suenos Marina as well as the Quepos Marina. There are three species of Marlin in Costa Rica; Stripped Marlin, Black Marlin, and Blue Marin. The latter is most famous for its incredibly powerful strikes, as well as its acrobatics and charging runs. The endurance of these apex predators is also astonishing, able to fight hard for hours. The Blue Marlin averaging in the 200 to 450 lbs. range, but reach a mind-blowing 2,000 + lbs. Fishing reports from both Los Suenos Marina and Quepos Marina commonly report landing 600 lb. Blue Marlin.

The Marlin family (Blue, Black & Stripped) are easily recognized their long spear pointed upper jaw as well as their large dorsal fin starting close the head tapering along their back. Blue Marlin have a brilliant royal blue color on their backs and white underbelly. With the Black Marlin their pectoral fin is rigid, cannot laydown (folded) flat along their backs like the Striped and Blue Marlin species.

Marlin has a voracious appetite attacking small tuna, squid, mahi-mahi (dorado) and other pelagic species. Using their elongated upper jaws they stun their prey by whipping their bodies with tremendous torque shocking their prey with the power of the initial blow allowing the marlin feed at their leisure.

How big do Marlin get in Costa Rica waters?

Blue Marlin, on average range from 150 to 500 lbs., and Black Marlin tend to be bigger. With both Blue and Black Marling, the females are larger and it is not common to find males over the 300 lbs. mark. The record according to the IGFA for Blue marlin is 1,376 lbs., and the black marlin record is 1,560 lbs. That’s a boat-load of power!!!

Where is the best place for Marlin fishing in Costa Rica?

The best place for Marlin fishing in Costa Rica is actually a large area, covering most of Pacific Coast. With that said the most prolific region is offshore from Los Suenos Marina and from the Quepos Marina. Marlin is migratory living and traveling close to the surface in deep waters and generally found in warmer waters preferring a between 70 F.to 85 F. degrees, which is the reason they are found in Costa Rica throughout the year. The continental shelf just off the Pacific coast of Costa Rica is an amazing feeding ground for Marlin and only takes about 30 minutes to 45 minutes to reach them in a Costa Rica fishing charter.

In conclusion, Marlin fishing in Costa Rica has steadily gained popularity over the past two decades and now the sport has become the biggest tourist attraction in Central America. Costa Rica’s Pacific coast is the countries number one destination for Costa Rica sport fishing charter. If you are interested in hooking with some great sportfishing charter deals for your next vacation in Costa Rica, drop us a line, we’ll set you up with everything you need for a successful deep sea adventure.

Click here for more information on Fishing in Costa Rica